Native to the tropics of South and Central America, it is a serious weed in Australia, the West Indies, Indonesia, the Florida wetlands of USA and Suriname. Once considered a source of dry season fodder for cattle, it has been used as a forage crop in Australia, Venezuela, Mexico and Cuba.

Hymenachne is considered one of Australia’s worst weeds and is a Weed of National Significance. It has the potential to spread further in Northern NSW and become a major weed of wetlands and waterways. Small infestations have been found on the North Coast in the Richmond River catchment. Infestations have been discovered at Cobaki, Georgica, Lillian Rock, Lismore Race Course, Yorklea, Leeville, West Coraki and Oaky Creek. A native Hymenachne species occurs in northern Australia. It does not grow south of Mackay, Queensland, and is not considered a problem.

An erect grass that can grow in water up to two metres deep, it prefers swampy situations such as river banks and seasonally flooded areas.

In NSW, Hymenachne only reproduces by broken stem fragments and stolons. Stolons run along the ground and produce roots at each node, forming a new plant. Broken fragments of plant can be carried to new locations by floodwater and will take root in moist soil. It thrives in nutrient-rich water. Flood waters will also transport fragments into waterways, irrigation storage facilities, sugar cane crops and natural wetlands.

Control of Hymenachne is difficult. Most success has been obtained from repeated herbicide treatment to infestations. Burning and heavy grazing before flooding have also provided minimal control.

If you have seen this plant, please report it to Rous County Council or Industry and Investment NSW for positive identification. 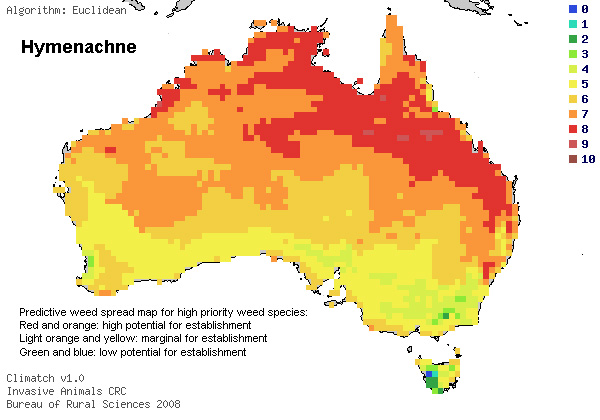